Put Victoria On Your Table 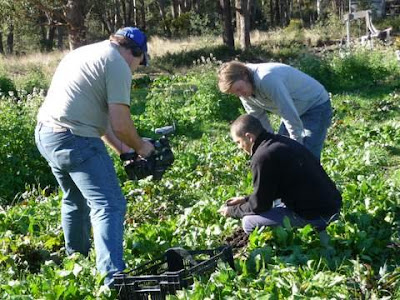 As part of the Melbourne Food and Wine Festival this year they are including a segment called Put Victoria on Your Table (PVOYT). This is a concept that aims to encourage people to buy Victorian food and wine from markets, shops and restaurants.

To launch PVOYT there will be a lunch for 60 media and food industry people at a Melbourne restaurant on the 25th of June. At the start of the lunch a movie will be screened showing the chefs that cooked the lunch talking to the farmers and picking the produce from which the lunch was made. 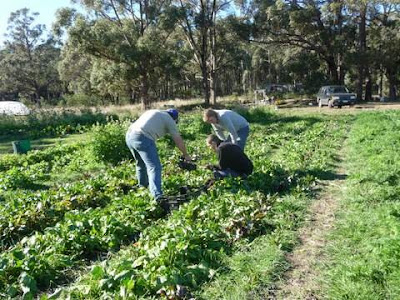 Today we had Matt Wilkinson from Circa in St Kilda and Richard Cornish here filming.

That's Matt in the grey and Richard is the one with the camera. 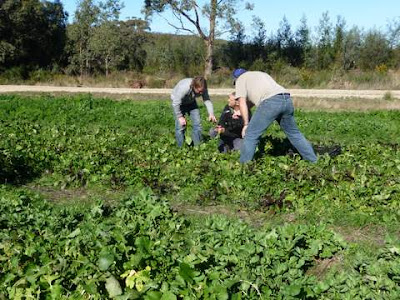 It was midday and made for some difficult photography with the sun so high in the sky. 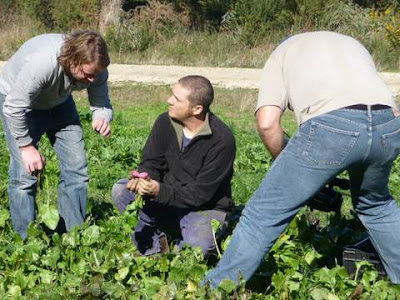 They asked questions and Bren chatted about the vegies, the varieties, organics and the soil. He was so comfortable in front of the camera they asked him if he'd done it before. Of course they warned him that it would be edited and an hour and a half of film would end up as a few minutes. 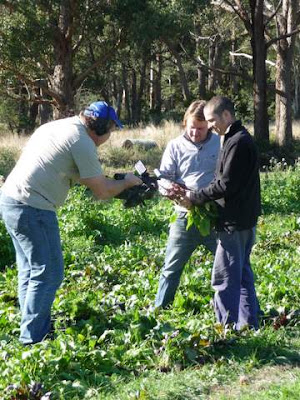 Every table at the lunch will have a display of our heirloom vegies as the centre piece. 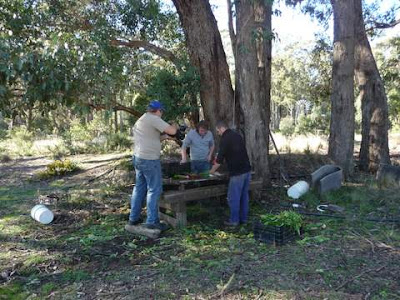 Washing the vegies under the shade of the trees made for better photos. 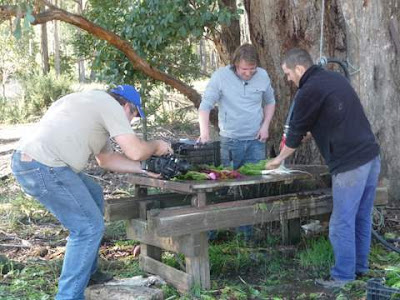 It was a great visit and the beginning of an exciting new concept.

The movie will be released onto youtube in the near future. We'll let you know when. 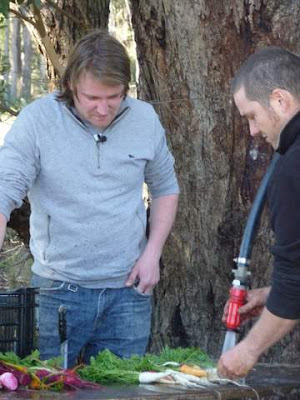 Posted by daylesford organics at 6:08 PM

How exciting! Wouldn't it be wonderful if everyone was more aware of food miles, and was encouraged to buy locally grown produce.
I just wish there was a farmers market closer to my suburb.

ooh you little devil! That is so not fair!! I wanna know, I wanna know! Are you hatching a Hollywood block buster starring a purple carrot, will you be moving the farm to L.A.? Gosh, now I won't be able to sleep...x

To quote Emily: "Woo hoo'. Well done, guys. I am proud of you. xxxxxx

Like you, my table also stands in Victoria and eats as much as possible from the ground it stands on, it grows in

It just keeps getting better! So exciting, compelling and suspenseful all the components of a good book..... perhaps!!!??? x