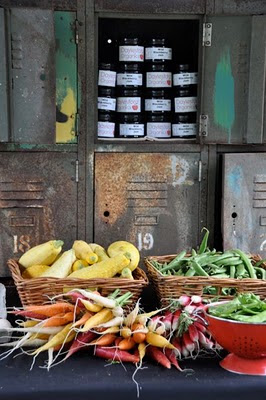 Last Tuesday we set up the stall extra nicely because we were to have some special guests. Paul Mercurio and his Mercurio's Menu crew paid us a visit. 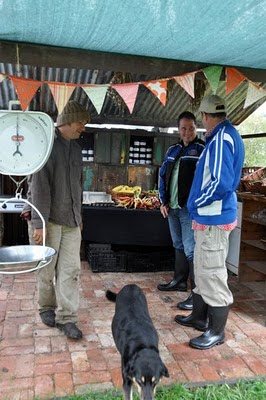 Bren called them the day before to warn them to come prepared because we'd had over 70mm of rain and it was muddy, so they all turned up with matching, brand new, shiney gum boots. Look at the glare coming off them! 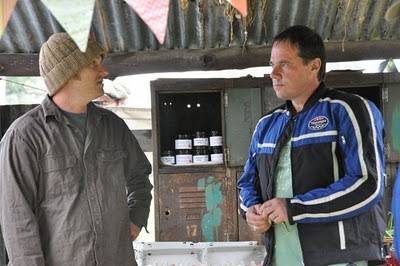 Paul was really lovely. He was enthusiastic about what we are doing, asking lots of questions and happy to taste and smell everything along the way. 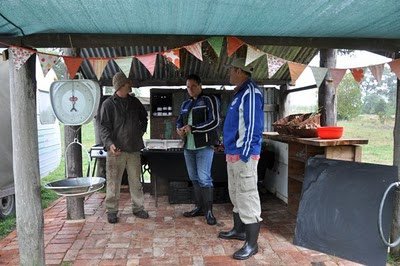 This was the prefilming production meeting where we planned the order of filming, the route we would walk and the menu. 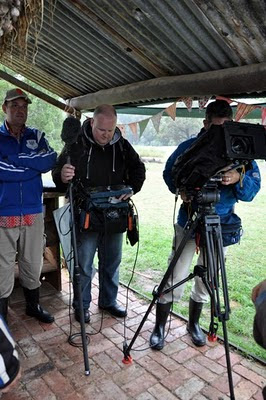 And from then on this is what we were looking at for most of the next few hours. 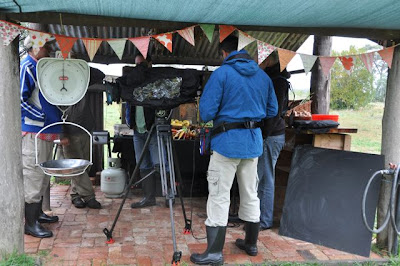 We spent ages walking around the farm and doing each shot over and over from different angles and wide and narrow and with talking and without. 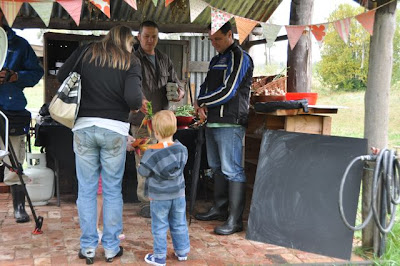 At one stage near the end when the filming was over and everyone was packing up, some of our favourite customers Deb, Alia and Michael turned up. They were so gorgeous and enthusiastic that Paul's producer made the camera man and the sound man unpack to film them shopping.
They were such good sports buying their vegies and eggs over and over again. 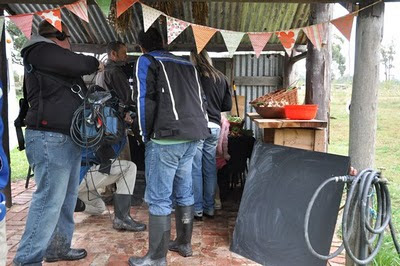 We had a great few hours filming but of the three and a half hours of film who knows how much will end up being shown in a 26 minute program of which we are only one part.
A final word of warning to anyone considering doing television appearances. If it is cold then wear your jacket in the first scene, otherwise you will not be allowed to put it on later on for reasons of continuity. It'll be interesting to watch my lips gradually turn bluer and bluer, I wonder how that works in this whole continuity thing.
Posted by daylesford organics at 8:58 PM

Hey Kate, I am sure you wont get too posh to hang out with us. Hooray for you! Do you have a media agent or something???!

How exciting, it sounds like a very interesting experience and one that you all enjoyed.

How exciting!! Big congrats to you guys for this too!

How exciting for you Kate and Bren! I love the show too. Did they give you a date as to when it will air on tv.

What a multi media mega star! How exciting.

It sounds like you guys are really being well recognised at the moment, which is really great! I'm slightly jealous - I'd love to meet Paul Mecurio sometime! I hope they took some of your jam, too, because it's really yummy.

I loved these shots and the people ducking under your gorgeous bunting! Can't wait to see it on tv, blue lips & all xo

WOW Congratulations Kate ... It's lovely to know Paul's as pleasant and keen as he seems on the show - please let's know when it will be screened - your place and produce looks beautiful ;)

oh wow please tell us when it comes on tv! I can't wait to see it, well done! you guys deserve it

oooh how exciting! i wish i had a telly so i could watch it! oh and i love your stall set up...looks great with the metal and the jars and beautiful produce. must get there.

Great news Kate, please let us know when it is going to be on the teev (and what channel)
Well Done

soo very exciting!!!
I think I need an autograph when I finally meet you!
and how funny that Deb & the kids popped by, I saw them just the other day, they are so very lovely.
well done Daylesford Organics, you are the best!!
♥

Wow! How cool!! Do you know when it's going to air? What great publicity too!!

How exciting - you will have to let us know when it will be on - I love watching this show:)

congratulations kate and bren! That is amazing news. I am so happy and proud of you. What an achievement