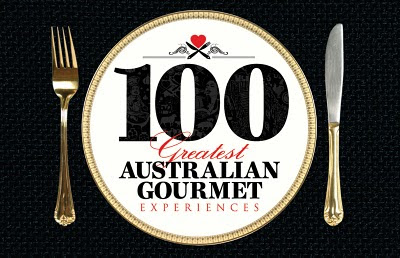 About a month ago I got a phone call from Australian Traveller magazine telling us that out of 1000 nominations we had made it into the top 100 in their 100 Greatest Gourmet Experiences. We were pretty excited at that point. I was mostly excited that they wanted some of my photos to use in the magazine. 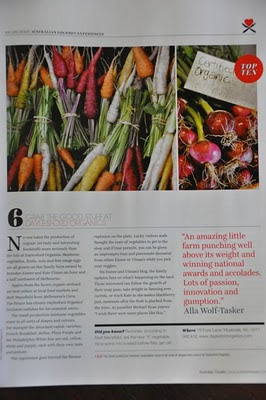 Last night there was a function in Sydney to announce the list and out of one hundred we came in at number six!!!!
We had a film crew here from the local news yesterday afternoon to announce it to the region. 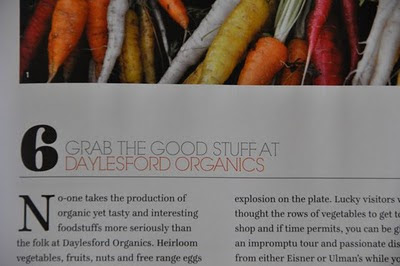 We are all pretty excited around here today.
In a list that included eating Vegemite on toast (57), Stephanie Alexander's Kitchen Garden (11), Jacques Reymond (16) and the ANZAC biscuit (63), we came SIXTH!! 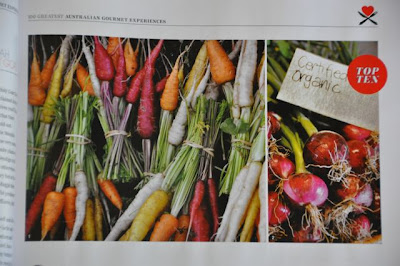 There is a whole page article with great big photos that I took. There are lovely words about us and what we are doing and a rave about this blog.
I think it is the first sentence of the article that we are most proud of though, it says;

No-one takes the production of organic yet tasty and interesting foodstuffs more seriously than the folk at Daylesford Organics.

That's been part of our mission statement from the beginning and its wonderful to be recognised for this.
Also in the top 10 is Shannon Bennett's Vue De Monde at number eight who we supply our certified organic, heirloom vegies to and our friends at the Holy Goat dairy at number five.
We do what we do because we believe in it and because we love it but it certainly is a great feeling to be recognised for it too.
Posted by daylesford organics at 1:19 PM

Congrats! That is wonderful news, keep up the great work :)

Everyone must be as high as a kite, that is such a worthy list of people to be listed with.

Fantastic! What an interesting idea too for a top 100. Congratulations again! :)

congratulations to you guys..totally inspiring you are...I can't imagine all the hard yakka that goes into producing the quantities of beautiful organics you do, I can't even grow climbing beans without anything mowing them down!

fabulous news!
you just keep going from strength to strength
may your harvest always be plentiful and delicious!

Woooo Hoooo!! From me and JDog. XXXX

Cant believe you have sunflowers!!! Good for you. More pics please : )

I am not surprised, judging by the photos in this blog - it looks fantastic. You must be so pleased!!! Congratulations.

I am so proud of my grandvegetables! and the people who grow them...

Congratulations! You guys are on a roll.
"Living the Dream"

Congratulations.
What a thrill!

WOW!! You guys are the greatest -
how wonderfully fabulous, and written with such genuine thrill, you really spread the love..
Have a wonderful celebration.
Hey, the 5 of you and the farm = 6, cool!

Congratulations guys. The produce will taste even sweeter now - but then again - I'll bet that's impossible. I'd adore to be closer to buy. Keep beaming ;))

Wow! How exciting! I am a lucky girl to live close to Daylesford Organics and Istra Smallgoods. We love living in the country! I am so very pleased for you.
See you
Simone