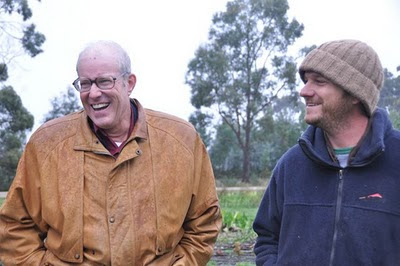 We had a fantastic week running and attending activities, but of course the highlight was the self proclaimed lunatic farmer himself Joel Salatin. 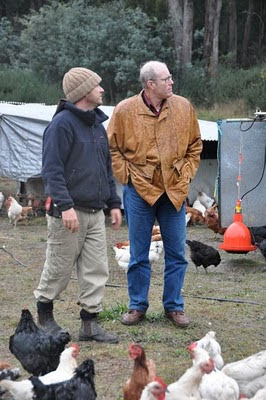 Thanks so much to DMP and to The Lake House who brought Joel out from America. The Daylesford Organics team attended every seminar he gave, but the best part of all came last Friday when Joel came to our farm to walk around and talk to us. 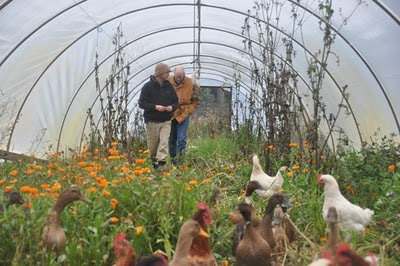 Nine years ago when we started farming organically and were on the steepest learning curve imaginable, it was Joel's books that advised us on many of the particulars like movable chook houses and electric netting fencing and indeed gave us permission to believe we could do it.


When not many other farmer's wanted to share their knowledge with us, Joel's books did.


Nine years ago, many of Bren's sentences started with 'Joel says...' and this renegade farmer gave us permission to do things in an unconventional way and to make our farming dream a reality. 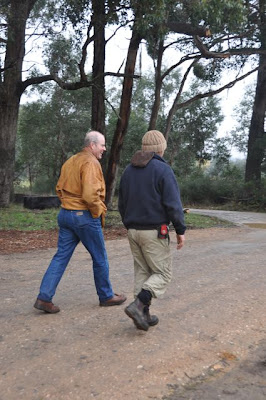 Nine years later on a wild and wet afternoon, Joel came to our farm and spent the best part of an hour walking around, looking at our systems and discussing our plans with us. Of course he recognised a lot of his own systems and ideas but he was also very complimentary and interested in our methods too.


It was one of those fantastic full circle life events. Here we were with the master showing him what we had learnt but also how we had developed our own farming systems.


We spent the last part of Joel's visit discussing future directions Daylesford Organics could take and let me tell you, watch this space because we are pretty excited to put some of his suggestions in place.


As Joel was leaving our farm Bren asked him to sign one of his books. The book is called You Can Farm and in it Joel wrote 'Oh yes you can - and yes you are.' How cool is that! 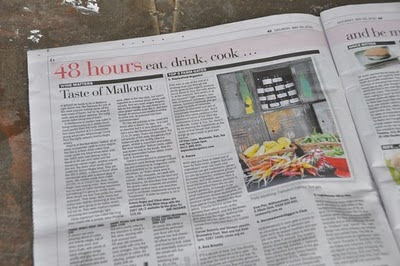 Saturday brought with it the publication of one of my photos in the A2 section of The Age newspaper. There was a 'top 5 farm gates' and they listed us as number one. When I opened the newspaper up in the car park of the local service station I screamed. Loudly. I was thrilled they had made us number one and that my photo was enormous.

I guess we do owe an apology though to those who read the bit in the paper and then came to visit us yesterday only to find we were closed. Unfortunately, while we knew the piece in the paper was coming, we had no idea which date it would be published and it was bad timing that it coincided with an all day seminar by Joel. The seminar was called 'How to scale up without losing your soul' and was attended by our whole team leaving no one to man the stall.


We do feel terrible if you made the journey and we weren't here and hope that you found other ways to busy yourselves in the area.


Have a great week out there.
Posted by daylesford organics at 12:44 PM

I love this story!! Good on you guys for all your hard work. xx

so jealous here! that is so great.

So thrilled for you! This is a perfectly gorgeous story, and you must be so pleased and proud to have hosted one of The Greats!

What a special day. Am excited to see what the exciting new things are xo

Brendon ,met you at Taranaki Farm workshop in may .Inspirational stuff mate. We are heading down the CSA path in the Mid North of SA and take great heart from what you have achieved , more power to you both Regards Johnny Mac Barunga Ridge Produce

My daughter met Joel Salatin 2 weeks ago!! She just spent 3 weeks on a sustainable/organic farm for a college class, and one day the students went to a class/seminar taught by him. She has really been inspired to make a lot of changes in her food choices.